New album on ILK Records: Green Side Up 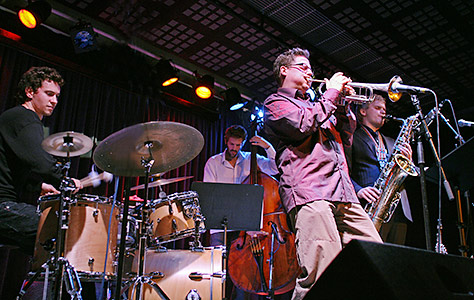 Just like in the case of Triot, a cooperative trio featuring Finnish saxophonist Mikko Innanen with Danish bassist Nicolai Munch-Hansen and Danish drummer Stefan Pasborg that can be heard on Sudden Happiness (TUM CD 008) with saxophonist John Tchicai, the establishment of Delirium was a direct result of the fact that Mikko Innanen spent a year studying at the Rhythmic Music Conservatory of Copenhagen in 1998 and 1999. Copenhagen has always had an active jazz scene and it did not take long for Innanen to hook up with some of the local musicians and fellow students at the Rhythmic Music Conservatory. In fact, Triot was already established at the turn of the year whereas Delirium followed in the spring of 1999 when Danish cornetist Kasper Tranberg joined the group for a one-off performance and Munch-Hansen had to be replaced by another Danish bassist Jonas Westergaard due to conflicting commitments. After that time, the two groups have co-existed, with Innanen and Pasborg as the common links, and gradually Delirium has become the more regularly performing of the two.

In the three Danes, Innanen found kindred spirits who share his interest in open improvisation based on the traditions of both American and European modern jazz of the 1960s and 1970s. It is not coincidental that Delirium’s instrumentation brings to mind that of Ornette Coleman’s quartet of the early 1960s or the Tomasz Stanko-Edward Vesala Quartet of the 1970s. These two classic quartets and the musical styles that they represented were very much in the minds of Mikko Innanen and the other members of Delirium when they first started working together and developing material for the group. However, the music soon evolved into something of their own.

Upon its establishment, Delirium was able to start performing both in and outside of Denmark. In connection with a tour of Finland and Estonia in 2000, Delirium made a recording that was issued as Delirium (Fiasko) in 2002. This recording was well received by both critics, fellow musicians and the audience. Guitarist Pierre Dørge, the leader of the New Jungle Orchestra and one of the best known Danish jazz musicians of all time, had this to say about Delirium:
“With Ornette Coleman in the back pocket, the quartet play themselves into an original universe. They paint intense pictures that are obscure and straight-ahead – as well as wild and lyrical. A fascinating musical journey with the new, young talents and their fresh view on tomorrow’s jazz.”

After their initial recording, Delirium has continued to be one of the principal groups for its members and has performed at a number of jazz festivals. Also, the collective experience of its members outside of the group has grown exponentially. In reading their resumes, one can only conclude that the five years since the initial recording of Delirium in 2000 have represented a busy time for its members. The students of the year 2000 have become seasoned professionals. Fortunately, this has not tempered down the music. Now, as in 2000, Delirium’s music is characterized by a sense of adventure when they combine the tradition of modern jazz with their own fresh take on that tradition filled with the joy of freedom and experimentation. New elements, such as increased ethnic influences, have also enriched the music even further since the previous recording.

After a few performances around Finland, the group entered the studio for two days and also recorded a live concert that followed the studio sessions. On the final product, a mixture of studio and live material was included in order to capture both the more measured takes on the new compositions during the studio sessions and, perhaps, the somewhat more Delirious atmosphere of the live performance.