Vapaat äänet 2017 tour gets together Icelandic/Finnish/Swiss open mind power trio Equally Stupid and French saxophone & homemade electronic sounds wizard Matthieu Metzger. Starting from January 27th till February 10th the tour includes 8 double bill concerts across Finland. culminating at Helsinki, Malmitalo on February 8th. Equally Stupid celebrates his brand-new album Escape From The Unhappy Society released on Eclipse Music and also performs 4 concerts on his own, ending the tour in Tallinn on February 10th as part as Jazzkaar’s winter season. Matthieu Metzger performs a solo concert in Pori on February 1st at Validi Karkia -Klubi. This is the 28th tour which the Finnish Jazz Federation and Vapaat äänet produce together since 1996. 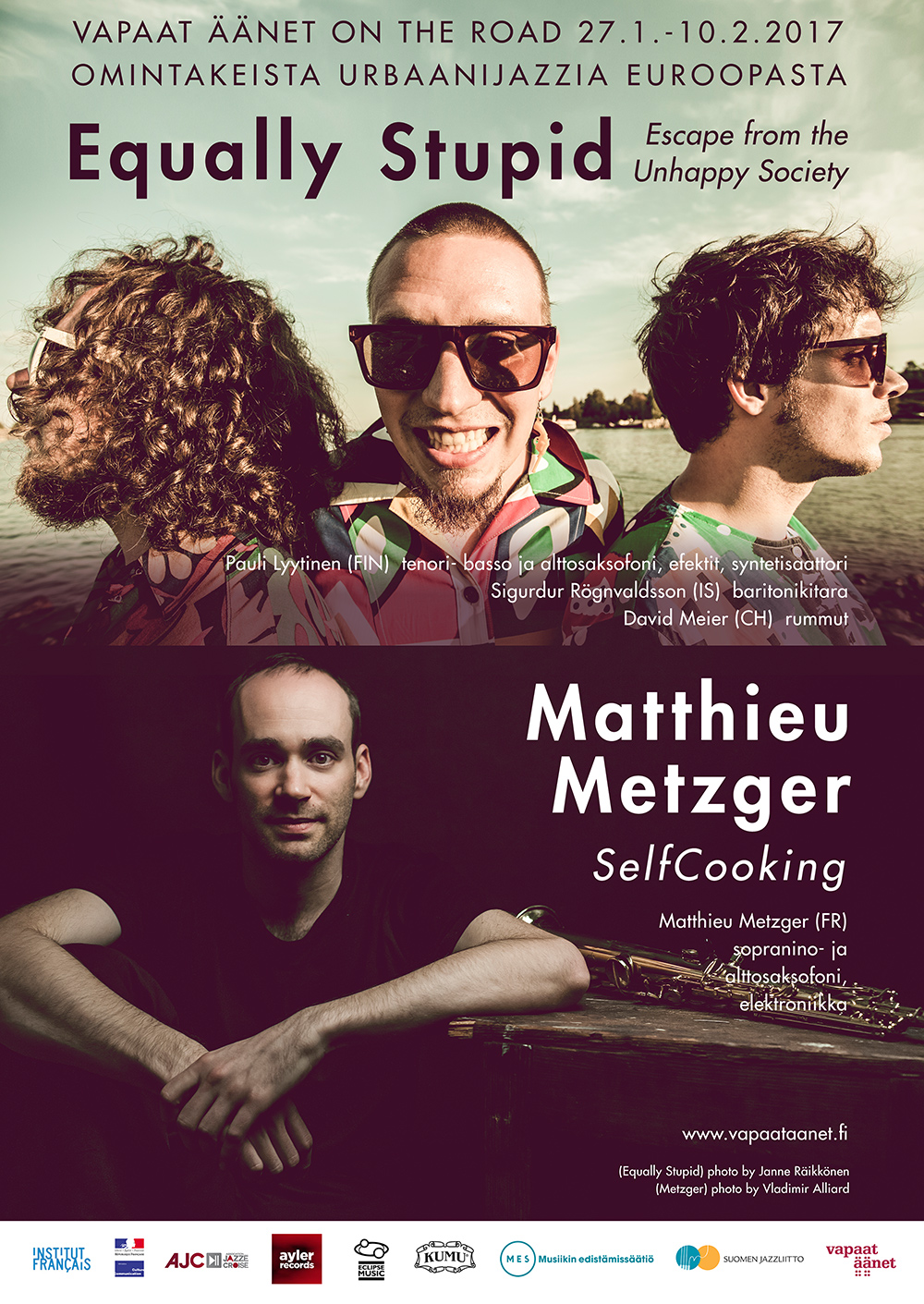 Icelandic/Finnish/Swiss Equally Stupid is a powerful and energetic jazz trio founded by Sigurdur Rögnvaldsson, Pauli Lyytinen and David Meier. The music is furious and intense yet melodic and it ́s built on imaginative compositions and rhythmical layers. Equally Stupid’s critically acclaimed debut Exploding Head was released by Finnish label Eclipse Music in February 2014. Their second album Escape From The Unhappy Society will be released on Eclipse Music in January 2017 and will be followed by a wide tour in Finland and Estonia.

All three members of Equally Stupid are active and versatile artists that have been touring internationally with their own projects for over a decade in Europe, Asia, Africa and South America. Some of their most active projects from the past few years are Elifantree, Dark Forest, Schnellertollermeier, DEFEKT, Laser, Raoul Björkenheim eCsTaSy and Trio Riot.

Saxophonist Matthieu Metzger likes going beyond the traditional techniques associated with his instrument, notably thanks to his passion for electronic treatments – he’s been designing real time transformation music software since he was a kid.

This investigator of musical genres loves to venture into dangerous territory. As well as being a fine jazz player/improviser and a former member of the French ONJ (Orchestre National de Jazz), he’s dipped into contemporary music, folk, rock, metal and mandingo.

His solo album Self Cooking was released in 2013 by Ayler Records. In the liner notes Matthieu explains: “Some of these compositions lurked in my memory or my shelves, others were specially written for this occasion – the strange and exciting experience of planning an album. With no unity to justify, no tragic concept. As a matter of fact, it was all about the pleasure of cooking for you something abstract and joyful.”