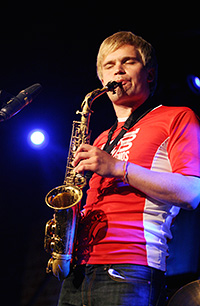 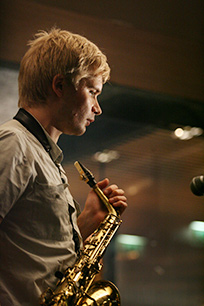 Fluent with the whole sax family, Mikko Innanen’s (born 1978) endless creativity and redblooded soulfulness leaves nobody cold. The heir of giants, like Albert Ayler, Ornette Coleman and Juhani Aaltonen, his jazz is never dry or academic, but playful, sassy, deep, surpising. Mikko graduated from the Sibelius Academy in 2003 and has shown his awesome chops in the Danish-Finnish Delirium and Triot, the French Triade, The Finnish New Music Orchestra (UMO) and his own Innkvisitio, to name a few.

“Mikko Innanen is the star of Finnish jazz. At least that’s how it appeared to me, while visiting Finland for three drizzly November days to witness the 24th International Tampere Jazz Happening. Before I left the U.S. for the festival, stateside journalists familiar with the saxophonist told me, “Lookout for Mikko.” And numerous Finnish jazzheads and journalists I spoke with in Tampere asked, “Have you heard Mikko yet?” Of the three opportunities to catch Innanen at the 2005 Tampere Jazz Happening, I saw just one: a duo performance with his drummer pal Stefan Pasborg at Telakka, a cozy restaurant/bar that served as one of three festival venues. Employing saxophones in all sizes (and occasionally a whistle), Innanen staked his claim as the Finnish jazzman of import, battling Pasborg’s skin bashing with wails and melodic contortions that recalled the playing of Ornette Coleman and Albert Ayler.” –Russell Carson, JazzTimes